Viewed by Larry Gleeson during the Venice Film Festival. 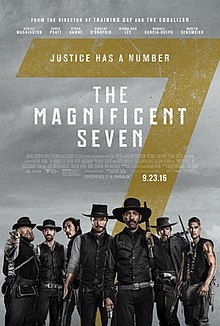 In 1960, Director John Sturges made the original Magnificent Seven, starring Yul Brynner and Steve McQueen, as an American Western. Sturges based his work on legendary Japanese director, Akira Kurosawa’s classic Seven Samurai. So in addition to being an end-of-summer blockbuster, Fuqua’s Magnificent Seven is a remake of a remake. Like Seven Samurai a good portion of Fuqua’s work takes place indoors and is evidenced by low-key lighting, heavy shadows and blackness.

This was Fuqua’s first attempt at a western although he claims to having had an affinity for them having watched many with his grandmother during his formative years. So when Metro Goldwyn Mayer approached him about making a western, Fuqua jumped at the opportunity. However, he wanted to make this his film with a theme to resonate with today’s audience. He didn’t have to look far to find a strong actor to lead up his core group of seven. Fuqua proposed Denzel Washington for the film’s lead, bounty hunter Sam Chisolm, having worked with Washington on Training Day and The Equalizer. Washington won an Oscar for Best Actor for his Training Day role and his on-screen partner, Ethan Hawke, received a Best Actor in a Supporting Role nomination.  Like Fuqua Washington had never done a western and looking back at the success the two have had together quickly came on board. Chris Pratt was identified to play gambler Josh Faraday, Chisolm’s sidekick and first to join the seven. Pratt, too, leaped at the opportunity to play a cowboy.

Soon Fuqua had an idea for his version of The Magnificent Seven as he and Washington performed research into the Old West. They discovered a wide-range of nationalities including Russians, Mexicans, and Irish. Fuqua wanted his seven to reflect this so he collaborated with screenwriters Nic Pizzolatto and Richard Wenk to create an authentic cast of characters utilizing a diverse group of young actors in addition to Washington and Pratt: Ethan Hawke plays Goodnight Robicheaux; Vincent D’Onofrio plays Jack Horne, Native-American Martin Sensmeier plays Red Harvest; Mexican-American actor Manuel Garcia-Rulfo plays Vasquez; and South Korean headliner Byung-hun Lee plays Billy Rocks.

The film is set in the town of Rose Creek where a ruthless industrialist, Batholomew Bogue, played convincingly by Peter Saarsgaard, is attempting to roust the entire town with threats, murder and mayhem for his own personal gain. The desperate town folk are at wits end when a woman, Emma Cullen, played by a tough Haley Bennett, reaches out and convinces the seven hired guns to protect and defend them from Bogue’s army of mercenaries. The men come together and find within themselves not only the will to fight and win but also the moral fortitude to do something because it is right.

Interestingly, like Kurasawa, Fuqua employs a number of camera techniques to highlight his film’s narrative. Many of his Hollywood closeups are shot just below the chin emphasizing the actors’ strong jawlines. Mauro Fiore is credited as the Cinematographer. In addition, impressive, expansive panning landscape shots are used to introduce the film with a non-diagetic score started by the iconic film score composer James Horner. Horner had over 75 projects to his name, along with two Academy Awards, and worked with Hollywood heavyweights like James Cameron, Oliver Stone, George Lucas, Ron Howard and Steven Spielberg. Horner did not live to see the completed product before his untimely death in June of 2015. However, he did manage to complete seven themes based on the film’s script and his conversations with Fuqua.  Composer Simon Franglen finished the film’s impressive score in a manner and style of James Horner as a tribute to Horner.

Throughout The Magnificent Seven Antoine Fuqua attempts to comment on today’s society and what he sees as overt acts of tyranny as he keeps with the Kurosawa thematic element of programming a film with societal mirrors and a political undercurrent. Notwithstanding, while Kurosawa used the unemployed samurai to form his seven, Fuqua finds a group of fringe characters with diverse backgrounds and nationalities. Still, both film’s characters do what is right and help those in need in spite of their own self-interest. My hat goes off to Director Fuqua for a valiant and noble effort. The Magnificent Seven is a fun film. It is well done technically with plenty of action and color. And, it is made in a similar vein as a world cinema masterpiece. Highly recommended.