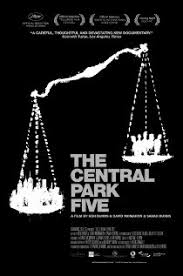 Viewed at the AFI Fest 2012 at Egyptian Theatre in Hollywood, Calif.

In 1989, five black and Latino teenagers from Harlem are arrested and  convicted of raping a white woman jogging in New York City’s Central Park. They are incarcerated in prison ranging between 6 and 13 years  before a serial rapist confesses to one of the erroneously convicted that he alone had committed the crime, leading to the  convictions of those erroneously imprisoned being overturned. Set against a backdrop of a decaying city beset by violence and racial tension during the mid 80’s crack cocaine boom, The Central Park Five,  tells the story of crime, a miscarriage of justice, the push by the police for confessions, a sensationalized media frenzy clamoring for emotionally charged stories and a public pushed to the brink with the common place Central Park “wildings’ occurring each weekend , and the five lives upended by the police department, the prosecutor’s office and the New York City Mayor’s Office. The five youths admitted they were in the park that evening committing other crimes.

The film is directed by legendary documentarian Ken Burns and his newcomer daughter Sarah Burns, who is the driving force behind the making of the film as she wrote her college thesis on the five falsely accused teens. Extensive use of archival footage combined with photos and current seated interviews provide an authenticity to the storytelling. At times it’s difficult to fathom how these young men were coerced into confessing. Yet, the Burns’ take the viewer on an “inch by inch” journey culminating in the release of the Central Park Five from their respective incarcerations. The question propagated being: was justice carried out? The obvious answer is not for these five young men. Other questions come to mind when these men are shown present day as they are finding it challenging to live life on life’s terms.

In a Q & A following the film (three of the Central Park Five were present and participated in a panel along with Ken and Sarah Burns), a civil suit against the prosecutor’s office and the police department came to light. The lawsuit is now nine years old and depositions haven’t even begun. The general consensus being that two to three more years will pass before the depositions are completed. Then, and only then, will the case be heard.

Yesterday’s headline news again reported a female jogger being approached by another group of five  young, teen-age men around 8:30 P/M in the northern part of New York City’s Central Park seeking the woman to provide them with kisses. The woman rebuffed the advances and police officers claim one of the teens touched her genital/groin area and purportedly ran off. The Central Park Five, is a very provocative film revolving around the issue of what constitutes justice and what collateral damage occurs in carrying out a Machiavellian “the end justifies the means” brand of justice.