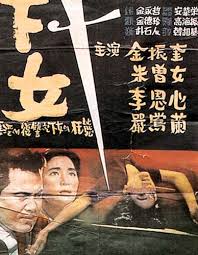 Considered by many to be one of the top three Korean films of all time, The Housemaid (1960), was directed by the legendary Ki-yong Kim. Kim is known for films Fire Woman (1970),  and Goryeo jang (1963). The film was produced by the production company of Kuk Dong, known for the Godzilla movies and The Three-Headed Monster. Kuk Dong was also a distributor for Harry Potter and the Chamber of Secrets (2002)  and The Sorcerer’s Stone (2001). The film also waas screened at the 2008 Tokyo Int’l Film Festival and at the 2009 Buenos Aires International Festival of Independent Cinema. The film’s cinematographer was Deok-jun Kim, known for Thirsty Trees (1964), Water Lady (1979) and It Goes Well (1989).

The Housemaid (1960) was shown as the second half of a double feature. The first half of the feature was a 2010 remake of the Housemaid. The 2010 version was directed by Kim’s old directing adversary’s son, Sang-soo Im. In my opinion, the 1960 version has stood the test of time. Shown in B&W, it’s a domestic thriller with mounting intensity up to and through the climax. It’s at the very end of the film when a most unusual resolution occurs that finally allows the light of day! The storyline is based on a news flash and focuses on a very traditional four-member Korean family. The family has moved into a new two-story home that forces both husband and wife to work demanding jobs to meet their bills. The wife is unable to work and keep the house. Begrudgingly, the happy couple makes the decision to hire a young eager Korean girl to be their housemaid.

Kim’s portrayal of the young housemaid is nothing short of brilliant. A working girl who becomes impregnated by her male employer rises up to run the household. In essence she has turned the table on the “ruling” class. Furthermore, Kim uses rats and rat poison so adroitly throughout the film to heighten the intensity. Couple the heightened intensity with the housemaid’s portrayal of envy and grossly overt sexual wantonness and the viewer is thrust into an unforeseen and dark thematic element of the expanding Korean middle class circa 1960. Despite the apparent housemaid’s scheming and havoc-wreaking behavior, ultimately leading to the fatal destruction of the family unit, not all hope is lost as Kim surprises the audience with a comical ending assuring the viewer that the situation depicted in the film won’t happen if he has learned the lesson so eloquently taught in The Housemaid (1960).