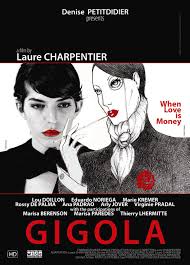 Gigola, directed by Laure Charpentier, is a French film with subtitles set in the early 1960’s Paris containing themes of adult sexuality and gender issues. The film made it’s debut at the Cannes Film Festival. From there Gigola was shown at the Hamburg Film Festival in Germany and finished out the year at the Paris Gay & Lesbian Film Festival, in Paris, France. The mise-en-scene is in Gigola is remarkable. The costumes, make-up, and lighting are spectacular conveying images reminiscent of That’s Entertainment (1974), and Moulon Rouge (2001).

The film opens with a teenage school girl named George, played by Lou Dillion, as a  young and slender coming of age debutante, and her teacher, an attractive mid 30ish woman. Playful background music provides energy for a highly sexually charged, sensual transaction between George and her teacher.

Charpentier jumps ahead to 1963 Paris nightlife scene. George’s boy friend has committed suicide. George has decided to withdraw from school and announces to the night-time partiers that she has flunked out of medical school seemingly intentionally.

Next time we see George she is in a Parisian bistro and we are introduced to a Carol Channing like character. George has reinvented herself.

Gigola, if nothing else, knows what she wants and she goes after it. She threatens to leave her new found matron unless she receives more money. The matron has already given Gigola a signet ring and a red MG convertible. The matron capitulates handing over to Gigola a large cache of currency. We now witness Gigola expanding her “business” with new girls working under her discretion.

Meanwhile, Gigola’s father, an opium addict, is squandering away the family’s estate as he cogently leads the life of a Parisian gentlemen. Eventually Gigola confronts her father brandishing a loaded revolver after repeatedly warning her father to stay away and, in turn, pleading with her mother to cut him off.

After an attempted suicide, Gigola finds herself under the care of a psychiatrist who bears a striking resemblance to her former teacher. She suggests having a baby to Gigola. Gigola is less than optimistic but the psychiatrist is able to connect with Gigola. Never one to miss an opportunity, Gigola deftly makes clear her intentions to the attractive psychiatrist. When the psychiatrist makes a “house call” Charpentier uses a wrestling take down move to portray the mixed emotions the psychiatrist has – she is attracted to Gigola but she is married and lives according to her principles as a married woman – a defining characteristic of the times. The psychiatrist cares about Gigola and they have dinner together where she tells Gigola that Gigola needs to let go.

Again without missing a beat Gigola moves deeper into the nightclub scene in Paris meeting a Mr. Tony Pasquale, a Sicilian. The two gain a mutual respect for each other and Tony ends up impregnating Gigola. Gigola has the baby and it seems as though Gigola has accepted normalcy and is conforming to societal norms. Gigola has left and George has come back.

However, before a sigh of relief can be expressed, in tromps the cast from the bistro. A raucous scene ensues in the hospital room with Gigola consenting to have her locks cut – a symbol of Gigola’s re-emergence.

The film closes with Gigola adhering to her somewhat circular, misguided idealism. She has turned over the care of her child to her mother and she is shown in tuxedo walking down a Parisian cobblestone alley way with her back back to the camera just before sunrise.